How to Reduce Train Noise In Your Home

Noise pollution from modern rail systems is a major concern for residents in and around Australia’s urban centres. The ultra loud decibel levels, high pitches and vibrations are a threat to well-being and put a major dampener on quality of life.

A lot of people assume there isn’t a way to reduce train horn noise and the deep rumble of the trains, trams and light rail that constantly travel areas like Sydney and Melbourne, but this isn't true. There is a solution, and it's surprisingly affordable.

Urban rail noise pollution is a modern problem, one that homeowners didn’t have to deal with decades ago when most of today’s homes and buildings were built. As a result, most properties don’t have the right windows to cope with today’s issues of noise pollution, as well as 21st century energy efficiency concerns and costs. A modern problem requires a modern solution, comprising advanced technology, efficient design and a reasonable price. With a tailored, professional window soundproofing system like Thermawood’s patented retrofit dry double glazing system, you can sip your morning coffee without ever cringing at the screech of the 6:45 train braking to a halt again.

Take a look at how soundproofing your windows for train noise works, and the difference it can make for your property and the quality of your indoor environment.

Noise pollution is a real problem. It can trigger anxiety and insomnia, increase stress levels and impact everything from cardiovascular well-being to ear health. Once you are exposed to 85 decibels (dB) or more, even for a short period of time, you are vulnerable to hearing loss.

According to the World Health Organisation, prolonged exposure to 80 dB or above can cause a variety of conditions and problems such as hormonal imbalances, pain, fatigue and poor performance at school and work.

Train noise, outside of the sound of the actual horn, is caused by a variety of factors. The sound of the engines, brakes and the movement of the wheels all contribute to train noise pollution. As such large machines, moving trains also have a vibratory effect, making the experience of living anywhere near public transport and suburban rail systems even more disturbing. How much train noise you experience will depend on several factors, namely the specific decibel level of the rail system you live near, how far away you are from the trains and whether there are any structures in place to mitigate the sound such as walls or screens for noise transfer.

The Sound of Train Horn Noise

For many who live near rail systems, the question is how to reduce train horn noise. Train horn sounds can vary in pitch from high to low tones, depending on whether the train is passing another train, passing through a station or at a level crossing. They are used to warn any pedestrians of danger but more commonly, you’ll hear train horns being used to acknowledge signals.

Train horns are one of modern society’s necessary evils as they do play a crucial role in safety and the efficiency of a rail system. Unfortunately, in order to be effective, they tend to be overwhelmingly loud, making blocking train noise a challenge.

For example, in Melbourne, the Metro’s new X’Trapolis trains’ horns have been recorded at an average loudness of 110 dB, with some reaching 113 dB (the recommended range for warning devices is 96 dB to 101 dB). During a test requested by Public Transport Victoria, the lowest train horn reading was recorded at 106 dB. Even for people living in suburban and rural areas, the piercing sound of horns can be an issue for rail systems that carry people in and around urban areas, like the X’Trapolis. These shrieking sounds can be even more startling for those who live outside of the city and who aren’t accustomed to the constant drum of street sounds and standard urban noise pollution.

The secret to train horn noise reduction and managing the thunderous sound and vibratory issues that moving trains and trams create is to address your property’s most vulnerable spot – window glass. With single glazed windows, sound can easily travel through. The high decibel and frequency levels penetrate through the windows, immersing an indoor space with a mildly dampened version of the sounds that are heard outside.

For those who live near public transport and suburban rail systems, where trains are regularly running, the level of noise pollution can range from frustrating to mind-numbing. The best way to block train noise is to retrofit your windows with double glazed units – two panes of glass with an air space in between. The air pocket, along with the extra thickness from two glazes, muffles out some of the sound.

A standard double glazed window may be enough to manage mild traffic sounds and suburban noises like lawnmowers and your neighbour’s dog barking. For train noise, using a special type of glass for blocking train noise, such as laminated glass, can make a substantial difference, reducing the noise level by 30 to 40 decibels, or more depending on other features of your double glazed windows such as glass thickness and the size of the air space.

With Thermawood’s patented retrofit double glazing process, an installer will come to your property to measure your noise pollution, testing for the decibel level and frequency of your train noise.

Then, they will develop a plan to achieve the right amount of noise reduction to provide you with the quiet home that you want.

For example, if you are dealing with 75 dB of noise pollution, with spikes up to 85 dB or 90 dB, converting your windows with double glazed windows that can reduce noise by 40 dB will help you achieve a quiet room. To illustrate this point further, 35 dB is regarded as a comfortable acoustic level for a bedroom.

Thermawood also machines acoustic seals into the windows during the retrofit process, which helps to cancel out rich noises even further and prevents sounds from penetrating through cracks in the window unit.

When you retrofit your windows to block out train noise, you’ll spend a fraction of the cost of new double glazed windows. Advanced retrofit technology has made soundproofing windows, even for serious noise issues like train horns and other rail sounds, both possible and affordable. Because you are converting your wooden windows rather than replacing the entire frame, you also won’t have to sacrifice the aesthetics of your original windows.

Just because you live in or around the city, doesn’t mean you have to live with train sounds. The blaring, screeching and rumbling don’t have to be a part of everyday life – not with a modern, practical soundproofing solution. 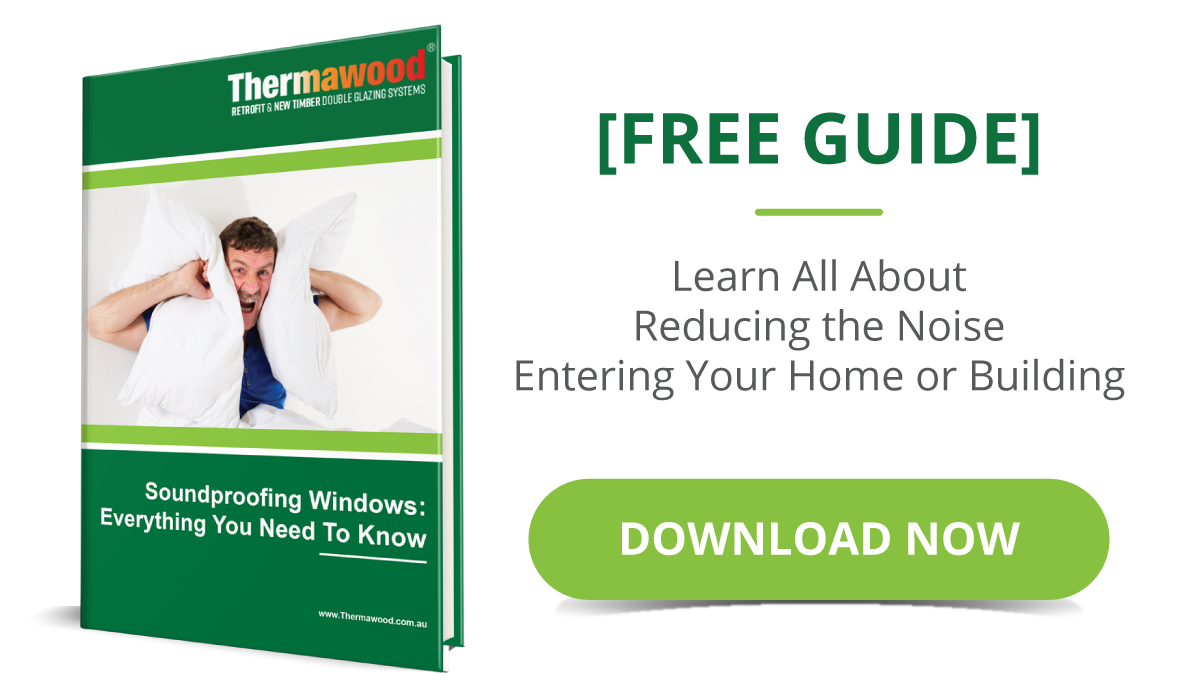